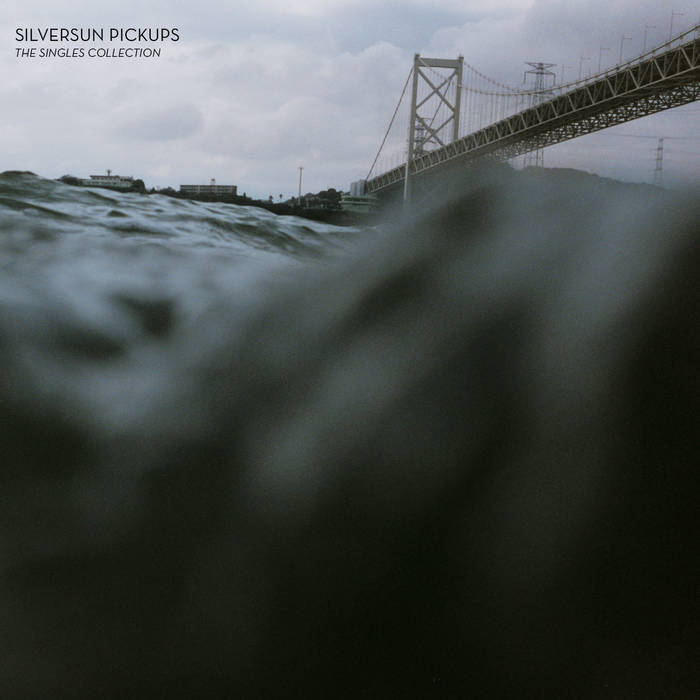 Tim Grady Why oh why has it taken me so long to hear these guys?? A friend I knew from LA once mentioned these to me over 10 years ago. I should have checked them out then. It's never too late. These guys combine melody and harmony with sonic maelstrom perfectly. Favorite track: Lazy Eye.

Silversun Pickups is among the most dynamic and creative rock bands of the post-millennial era, hailed far and wide for their inimitable merging of ethereal melodies and pure sonic force. From the indie rock opening salvo of 2005’s “PIKUL” EP to 2012’s visionary “NECK OF THE WOODS,” each successive release has seen the Silverlake, California-based band venture into uncharted terrain, bravely pushing their imagination and ability towards new and surprising summits. Ambitious and anthemic, tracks like “Panic Switch” and “Lazy Eye” have proven indelible classics, a guarantee of rare danger and invention amidst the anodyne dross of much contemporary rock. What’s more, the indefatigable quartet have made it their mission to bring their unique music to the people, touring the planet nearly non-stop to reach a devoted and ever-growing international fan following. Now, as they prepare to embark on their next creative voyage, Silversun Pickups pause for a last look back at the musical milestones that have marked their journey thus far.

“When Dangerbird approached us about doing a singles collection, we said, ‘No way! That’s crazy talk,’” says frontman Brian Aubert. “In our heads, we still don’t see ourselves as a singles band swimming in a singles universe. Our thought is, we’re okay with all of our songs. So it was very important to us that if we were going to do it that we could make it special. With that in mind, we were inspired to go in and record some new songs. Looking back, it ended up being quite positive, almost like a nightcap to the last 10 years…”

“Kissing Families”
From “PIKUL” (DGB 003, 2005)
That was the first song we ever wrote. We loosely started the band in 2000. We were roommates and friends but we were just kinda screwing around. I remember there was a party going on and no one could find me. I was in my bedroom with my Tascam and Nikki came in. I said, ‘Hey, it’d be cool if you sang this line,’ so she did and we wrote ‘Kissing Families.’ It was just so whimsical. To this day, when we go in to write songs and make music, our heads are still there. Having no rules, being completely free, nothing else really mattering. We really don’t care. If it happens, it happens.

“Lazy Eye”
From “CARNAVAS” (DGB 009, 2006)
Things had been moving upward for us but with ‘Lazy Eye,’ they took a much bigger leap than we’d expected. We never thought that would be the song we’d get on the radio but somehow that wasn’t the case. It’s a six-minute song that doesn’t change that much – which is something we really love – and it has this three-minute sonic blast thing at the end. Live 105 in San Francisco decided on their own that they liked it so they chopped the end off and started playing it. And that spilled over onto other stations. Nobody pushed ‘Lazy Eye,’ it just became a thing. Somehow it just organically happened. It was kind of baffling to us but we’ve never been the kind of band to worry about that stuff.

“Well Thought Out Twinkles”
From “CARNAVAS”
We really wanted to get loud. When we wrote ‘Well Thought Out Twinkles’ we were very nervous about it. We thought, is this too much? Is it too fundamental? Now we don’t ask those questions at all, but these are the things that plague your brain in the beginning. That song was us shaking off a little bit of our fear of the Rock. A lot of bands start out loud and are afraid to get soft – I think we were the opposite.

“Little Lover’s So Polite”
From “CARNAVAS”
The hard part about ‘CARNAVAS’ was ramping up some of our older songs to gel with the vibe we wanted to create with the album. ‘Little Lover’s So Polite’ started out in a whole different fashion, it was really slow and really droney. We couldn’t figure out what to do with it but at the last moment, we completely gutted it. We retooled it on the fly, changed the tempo, made it more fundamental, and it just all of a sudden came to life in a way that completely blew us away. It was a whole new song. We’d always been slaves to the rehearsal, slaves to playing live – that was probably the first moment into the way we’d always wanted to make music, at least until ‘NECK OF THE WOODS.’

“Panic Switch”
From “SWOON” (DBG 035, 2009)
‘SWOON’ was more blending, more angular, more fuzzy. The mood is bigger and heavier. Things got a little bit more grand. The emotion of that record is really hot. By the end we had 14 songs, everybody was tired, and I promised that was enough. I said, ‘No more, I swear.’ But making the album was a very nerve-wracking experience and I began to think that maybe there should be something on there that would be the most fundamental description of that feeling. The next day, I didn’t know how to tell them so I got to the studio early and started singing it and playing what eventually became the bass line, waiting for them to walk in. When they did, Christopher just got on the drums and then they all were behind it.

With ‘Panic Switch,’ we knew people were paying attention again, which is a really nice feeling. Knowing that there were people out there who wanted to hear it, that had a big impact on us. We thought, okay, I guess we’re around. That’s a nice place. That’s where we are now. We like just being around.

“Substitution”
From “SWOON”
‘Substitution’ was to ‘SWOON’ what ‘Little Lover’s…’ was to ‘CARNAVAS’ – just a complete nightmare. We just couldn’t figure out how to get that song moving, and again, that’s because there was too much in it. The song sounds so simple and the reason it was so hard was because we didn’t realize that that’s how it should have been all along.

“The Royal We”
From “SWOON”
‘The Royal We,’ on the other hand, was easy. It was one of the first songs I wrote for ‘SWOON.’ I knew I wanted strings to carry it, though I thought maybe a violin quartet. But somehow or another, it became a 16 piece orchestra. I remember people seeing production photos of us with the orchestra and going, ‘Uh-oh,’ but we kept saying, ‘don’t worry, the strings are there to make it sound worse!’ We always hoped the strings would make it more off-putting. Our friend Will Canzoneri from Darker My Love, he conducted the whole thing. He took my ideas and turned them into reality. To finally hear it come together, a year after writing it, we were just so stoked. That was a big day, a really grand day for us.

“Bloody Mary (Nerve Endings)”
From “NECK OF THE WOODS” (DGB 083, 2012)
The first rule with ‘NECK OF THE WOODS’ was to break all of our rules, to go against everything we ever did before. Then we realized that was a rule, so we had to break it. I wanted the album feel like there was something brewing underneath the surface that would show its head here and there but never quite comes out. There’s something underlying, bubbling through the whole thing. ‘Bloody Mary’ was the song that really helped shape the rest of the album. The themes were much less, ‘This is how I feel. Listen to me rant,’ and more spelunking into the past.

We were so happy when they chose ‘Bloody Mary’ as a single because it offered a different aspect of us. You don’t want to stay in the same mode. With us, we always try to stay uncomfortable, which hopefully makes us keep moving on. If there was ever a moment where we felt we were plateauing, where what we were doing didn’t give us the same feeling we had in the early days, that would be a day. We’d really have to reevaluate ourselves.

“The Pit”
From “NECK OF THE WOODS”
One big change with ‘NECK OF THE WOODS’ was that we started to become more open to blending electronic drum sounds with live drum sounds. Even though the guitars and keyboards were swirling all throughout those first two albums, the drums and bass never really did. So with ‘NECK OF THE WOODS,” we wanted the drums and the bass to have as much freedom to explore sounds. ‘The Pit’ started out more in the vein of The Knife – a band that we really love – but it was almost a little too gloomy. We thought, well, let’s try something we’ve never done before and just treble out the bass. Those are the kind of things that happened on ‘NECK OF THE WOODS’ that hadn’t really happened before – we weren’t locked in.

“Dots And Dashes (Enough Already)”
From “NECK OF THE WOODS”
Our producer, Jacknife Lee, he did a good job of getting into us and finding out what we wanted to happen. We thought we wanted more acoustics, more warmth, but he said, ‘Maybe it should be really big.’ He had the idea of getting more Valentine-y – we’d always gotten compared to My Bloody Valentine, but we never really did it. We thought, okay, let’s get full-blown, really blankety and strange. That opened up a whole new door for us that Jacknife really helped us get through. ‘Dots and Dashes’ was a big one for us and we knew we wanted to honor the song in some way. We wanted to take it out of the album and put a spotlight on it. I admire any radio station that plays it. I mean, wow…

“Cannibal”
From “THE SINGLES COLLECTION”
There’s a fundamental sound that comes out of the four of us and it’s going to be in there no matter what. So what we’ve learned is that we can move all over the place and it’ll still sound like us. When we decided to do this collection, we did a couple of songs with Jacknife – one ended up on a 10-inch for Record Store Day and ‘Cannibal’ is the other. Structure-wise, it’s really simple but in that short amount of time, we wanted to be constantly throwing new information in there. We wanted it to feel surprising, even though it’s a pretty straightforward song.

Bands like Radiohead and The Flaming Lips and Wilco, they opened a door into being creative with all your tools. There’s a playfulness that we’ve always aspired to. We’re starting to move on. Like with everything we’ve done, we want to try something new and unsafe and scary. Who knows exactly where we’re going to be or what we’re going to do? We’re just looking forward to getting together with no plan, making music and seeing what happens.

Photo by Asako Narahashi, Mekarim 2004. from the series, "half awake and half asleep in the water"